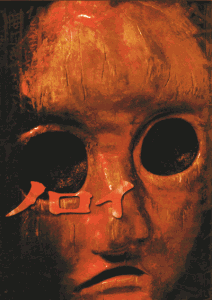 Little late to the party with this one, but I think a shout-out is well justified, as it is not one of the best known j-horror movies. If I had known this movie had been done by the same director as Ju-rei (a poor man’s Ju-on), I am not sure I would have given it a chance, but I am glad I did.

Even though it uses a tired format (fake documentary), the way it is all set up (a programa about a paranormal investigator’s last investigation) allows the viewer to complete the puzzle in a non-linear way. The first few scenes don’t come naturally together until the final act of the film, but to its advantage, I found the different pieces of the puzzle in the form of video sources (other TV programs, 70s film, …) to be really entertaining and well done, too, they didn’t feel fake at all.

And then there’s the creepy factor … It is in the details. As I was watching the movie, what convinced me I would enjoy it more than most movies was a bit of hair in water, of all things. From there, the evil keeps growing until the very end, and then then end after that first end, too.

This is not much of a review, but if you like horror films, you might want to give this one a chance, because there are not that many that are this good …